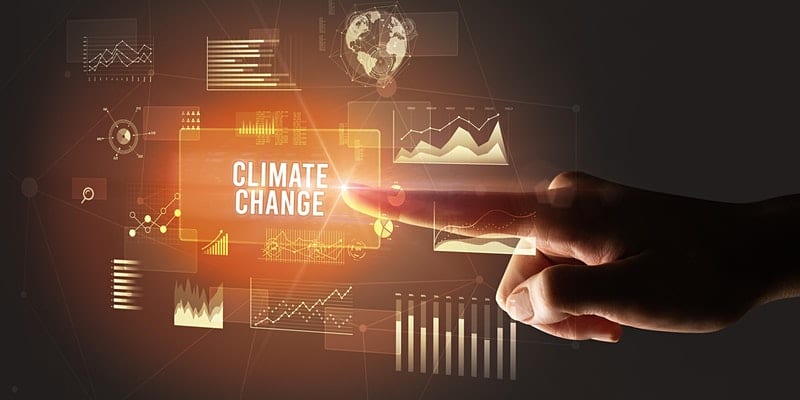 Open Data has proven to be of critical importance in the fight against climate change. Weather and environmental data are key from a transparency perspective to accurately present facts at both regional, national and international levels linked to this challenge.

With direct participation from Minister Smyth, the Open Data Impact Series on Climate Change included a panel of international/national speakers that shared their insights and experience on how open data is produced, shared, linked and consumed to fight climate change.

Please fill out the form to get access to the recording.

You can download the different presentations in the links below.

Keith joined Met Éireann in 2006 after a spell in the energy industry. With a background in physics and earth science measurements he quickly settled into his role as Chief Scientist at Met Éireann’s flagship weather station, ‘Valentia Observatory’. Among other responsibilities Keith led Ireland’s weather balloon, solar radiation, stratospheric ozone and geomagnetic monitoring programmes. It was at the Observatory he gained an appreciation for the level of effort it takes to make long term reliable observations suitable for climate studies.

Today Keith is Met Éireann’s Senior Climatologist where his interests have changed from measuring the climate to instead using this knowledge of the past, as well as the future, to assist sector experts in how best to adapt to our changing climate.

Gavin Smith is a graduate of both NUI Maynooth & Trinity College where he studied Maths, Geography and Environmental Science. He is a Scientific Officer with the Environmental Protection Agency (EPA) for over 15 years. The EPA recognises the potential of Earth Observation & Spatial Analysis technologies in monitoring and protecting our environment, Gavin works within the EPA’s Data Analytics Team in co-ordinating how best these technologies can be used for the environment. He is currently working on 2 key land monitoring projects. The first is the National Land Cover Mapping Project, that Gavin has played a leading role in for over 10 years, and which is now coming to fruition under an OSi / EPA partnership that is going to deliver a high resolution land cover map for Ireland in 2021. The second project is on the integration of national land use data to provide evidential spatial land use data for calculating GHG Emission for Land Use Land Use Change & Forestry (LULUCF) as part of the National Inventories Report. Gavin is also involved in many associated research projects through the EPA Research Programme and is a Member State Expert contributing into the Copernicus Land Monitoring Service run by the European Environment Agency on behalf of the European Commission.

Brian Ó Gallachóir is Director of the SFI MaREI Research Centre and Professor of Energy Engineering at UCC. He leads MaREI’s research on building and using energy systems models that have underpinned Irish and EU energy and climate mitigation policies and energy company strategies. He is also MaREI’s Education and Public Engagement Champion and received the Science Foundation Ireland Best International Engagement Award 2020. Brian is elected Chair of International Energy Agency Technology Collaboration Programme on energy systems modelling (IEA-ETSAP) and an elected Fellow of the Irish Academy of Engineering. Brian has published extensively (over 110 journal papers and h-index of 44), has a B.Sc. from TCD and a PhD from UCC.

Tim has over thirty years R&D experience in Geographical Information Science and Earth Observation, specialising in a number of research areas including;

He also manages a small number of R&D projects together with associated researchers in Precision Agriculture, Road Safety Risk Analysis, Data Standards, Maritime Monitoring and Emergency Management. He provides RTDI support to a number of start-up ventures based around geospatial science & technology including; Earth Observation, Mobile Mapping, Decision Support and Drones. He sits (appointed 2015) as the Irish National delegate for the Copernicus programme in Brussels.

Dr. Rowan Fealy is a Research-Lecturer in the Maynooth University Department of Geography, National University of Ireland Maynooth where he lectures on both theoretical and applied aspects of the climate system. His particular area of expertise is in regional climate analysis and modelling and land-atmosphere interactions at regional and local scales. He has published widely on all aspects of climate and climate change, with particular emphasis on Ireland. He contributes to the World Climate Research Program (WCRP) initiative which is seeking to develop regional climate projections for use in informing policy at all levels, as part of EURO-CORDEX. He has participated in a number of successful funded research projects as researcher, lead/co-applicant and PI working with state, semi-state, industry and international partners. In recognition of his contribution to scientific research, he was awarded a Fulbright Scholar award in Science and Technology 2012-2013 which facilitated his research, as a visiting scientist, at the National Centre for Atmospheric Research (NCAR) in Boulder, Colorado. He has previously participated in reporting to the United Nations, under the Framework Convention on Climate Change, and acted as an expert reviewer to the Intergovernmental Panel on Climate Change (IPCC) in 2007.

Jamie leads the development and implementation of Dublin City Council’s Smart City strategy. He works alongside the Chief Executive to ensure that the council takes advantage of the opportunity of technology innovation to drive better quality services and address priority city challenges in areas such as mobility/transport, environment and energy efficiency. He manages key relationships across industry, academia and government to promote and build out smart city solutions and demonstrators.

Charlotte O’Kelly is co-founder and CEO of TechWorks Marine Ltd, which she setup in 2002. She has a background in Oceanography and has over 20 years’ experience in this sector.

Charlotte has grown TechWorks Marine into a Marine Data Company, servicing clients internationally in the following sectors: Offshore Renewables, Dredging, Water and Aquaculture. Providing clients with Robust, Reliable and Secure Marine Data either from Data Buoy or in situ monitoring to Earth Observation products and services. Since 2009 Charlotte has worked closely with ESA to develop new data services to the Marine Sector.

Outputs from this project will be used to inform the implementation and continued development of Open Data policy in Ireland and as input to OECD and EC surveys and reports.

The task for the researcher is to carryout research into how open data is being utilised by businesses, civil society and within the public service to assess any economic, political and social benefits. The project scope includes:

We would like to ask attendees to contact our research fellow, Fatemeh, at [email protected] if you use open data in any of your activities.

The NationalOpen Data Initiative in Ireland is led by the Department of Public Expenditure and Reform, and is a key part of reform activities aiming to build more open, transparent and accountable pulic governance in Ireland. Over 10,000 dtasets are avalable on the Open Data Portal from a wide range of Public Sector publishers, including the Health Services Executive, the Central Statistics Office and Tusla.

Ireland has been highlighted as an Open Data Leader in Europe, ranking 4th in the Open Data Maturity Report in terms of readiness and quality of data published, use, and impact.

The Open Data Strategy 2017-2022 builds on the substantial achievements of the Open Data Initiative and sets out a roadmap for the Initiative’s continued progress and development for the next five years.